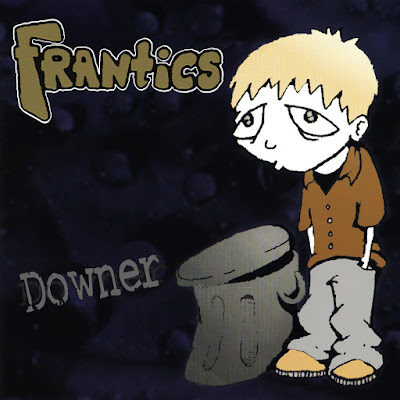 
It was the end, the end of the century...and the end of the Frantics.  Downer was recorded in 1998, but at the close of the year the album still hadn't been released and the band had a different drummer (the first new member since the group formed).  They hit the road and then hit the studio again, to lay down new material for appearances on other labels;  Downer hit the store shelves sometime between in early '99.  The real bummer came that summer when the Frantics had to cancel most of their opening slot on AFI's Black Sails tour, only able to perform one local show as a farewell to their friends and fans.

...And that was it, 'cause that's the way it goes sometimes.  In spite of being named Downer, this final full-length tackles maturity and mortality with positivity and humor.  Musically, it is the Frantics' heaviest and hardest work, as well as being their highest quality recording.  While She's A Drag and It's Casual are still fan faves, Downer is undoubtedly the crowning achievement of the kings of snotcore punk.

Now available in downloadable lossless audio quality with four bonus tracks from the band's last studio sessions:  a couple of compilation contributions and a pair of cover songs from the Ramones Maniacs tribute.

Be yourself, fuck EVERYONE else!
Posted by tREND iS dEAD! records at 12:21 No comments: